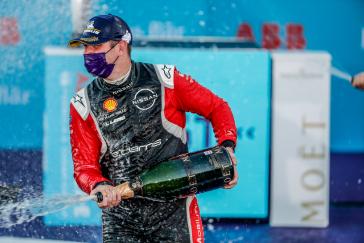 BERLIN, Germany – Nissan e.dams driver Oliver Rowland drove a commanding race from pole position on the grid to take his first Formula E win in the penultimate round of the six-round ABB FIA Formula E Championship season finale in Berlin. Rowland led every lap of the race and qualified top of his group before going on to take the top spot in the Super Pole qualifying session. He also had the fastest lap of the race.

Teammate Sebastien Buemi battled his way up to P10 and into the points on a new Berlin Tempelhof Airport circuit layout, after not setting a time in qualifying and starting the race in P22.

“An incredible race for the team today and an impressive victory for Oli,” said Tommaso Volpe, Nissan global motorsports director. “We had great pace in qualifying and the race, without sacrificing energy efficiency, which is the perfect scenario in Formula E. The team is fired up for the final race tomorrow and will race hard to secure P2 in the team championship.”

This solid haul of team points means that Nissan e.dams maintains second in the team championship with one race left of season six. With his win, pole and fastest lap, and 29 points scored, Rowland advances to second in the driver championship, with Buemi in eighth.

Nissan participates in Formula E to bring the excitement of its powerful EV performance to racing fans worldwide, and to demonstrate the power and performance of its zero-emission EV technology.

“Fantastic lights to flag victory for Oli,” said Olivier Driot, Nissan e.dams team principal. “The team performed brilliantly to prepare the race cars for both drivers, and Seb showed his champion’s spirit and skill by racing from P22 to P10. The team has worked very hard in Berlin for this season finale and that work is paying off. We look forward to the last race.”

Staged behind closed doors at Berlin’s Tempelhof Airport circuit, the last pair of three double-header races takes place on Aug. 12 and 13, on a different track layout to the prior two double-headers.

Nissan’s new brand logo features across the Nissan e.dams team garage, race cars and driver suits throughout the Berlin finale. The new logo was unveiled at the July 15 world premiere of the all-new Nissan Ariya, a 100% electric crossover SUV.

“I can’t thank the team enough. This is the biggest win of my career so far, especially when you look at the quality of the other drivers in the field. To win a race against all these top drivers is amazing, and hopefully we can build on this strong end of season performance and enter next season with good momentum.

It can be quite hard in racing when you lose a little confidence, it can really hit you. There have been a few times this season when I was just missing two or three tenths because I’m not quite confident enough, but it is a case of just building that confidence up. I got into Super Pole and started in P3 in the last race and that was a good step. Now it seems that everything is coming together; the team are working really well and our car is fantastic.”

“I think today was my best race of the season so far. I had the pace and I feel that we beat the other top drivers and teams fair and square today, so that shows that we made a massive improvement throughout the week here in Berlin. I felt very competitive all day, a little disappointed of course with what happened in qualifying, but really happy for the team and for Oli. We deserved it today; we worked really hard in the off season and now we are looking very good for P2 in the team championship. I look forward to the last race tomorrow and hope I can do a good job.”

Next Race Timetable
Round 11

Get more information about Nissan in motorsport on NISMO.com.