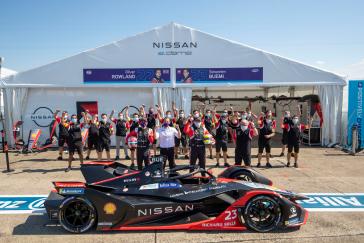 In one of the most intense and competitive motorsport season finales, the Nissan e.dams team, with drivers Sebastien Buemi and Oliver Rowland, delivered pace, performance and energy efficiency when it mattered most. The team scored 110 points in six races over nine days to clinch second in the team championship, taking the team’s total points to 167 points for season six.

Rowland dominated round ten yesterday, with his maiden Formula E win in a commanding display, taking the top spot in his qualifying group, pole position, and fastest lap before claiming the lights to flag victory.

In the last race of the season, round 11, the team once again showed their true pace with Buemi’s podium neatly wrapping up a strong overall season six performance.

“On behalf of the dedicated women and men at Nissan, we are so proud of our Formula E team and its second place finish,” said Tommaso Volpe, Nissan global motorsports director. “Despite challenging circumstances, the team has shown extraordinary resilience and ingenuity at every race. Our pursuit of performance and success in Formula E reflects our pioneering spirit and long-time leadership in EVs. The expertise we gain on track informs and accelerates the development of our road cars. The racing this year has been incredibly exciting, and it is this excitement in EV competition and driving, along with far-reaching technical advances, that shapes our all-electric road cars, like the all-new Nissan Ariya, a 100% electric crossover SUV.”

Nissan participates in Formula E to bring the excitement of its powerful EV performance to racing fans worldwide, and to demonstrate the power and performance of its zero-emission EV technology.

“The team proved beyond doubt their commitment, talent and determination this season,” said Gregory and Oliver Driot, Nissan e.dams co-team principals. “We showed some promise quite early in the season including a podium in Mexico City, but when the pressure was really on in these last six rounds, as we pursued second place in the teams championship, the team came together and gave the drivers a car that could win races. Oli and Seb then scored those critical points and we have our trophy. Achieving second in the teams championship is a great achievement for the team.”Â

Nissan’s second season in Formula E began with two top five finishes in the two opening rounds. The teams’ first podium came in round four in Mexico City where Buemi finished in third, but it was a late season surge in the six finale races in Berlin where the team fine-tuned a strong racing package into a car that could lead the rest of the field, with speed, grip, and, most importantly, energy efficiency.

Rowland’s win in round 10 and solid haul of points throughout the Berlin finale was enough for fifth in the drivers championship. Buemi drove his “best race of season six” charging his way through the field and into a point’s place of P10, after starting from P22.

In round 11, the final race of the season, Buemi qualified top in his group and P2 in Super Pole. After a tight battle with the leading group of three cars, Buemi crossed the line in P3, securing fourth in the drivers championship.

In the first five rounds of the season, preceding the global Covid-19 lockdown, Nissan engaged with thousands of passionate fans with prominent, interactive road car product displays in the track-side E-Villages. With the all-electric Nissan LEAF taking center stage, surrounded by the thrilling atmosphere of Formula E races, Nissan, with its Intelligent Mobility vision, showcased to the world that in racing, and on the road, EVs are exciting to drive.

When the global coronavirus pandemic put racing on pause, Nissan e.dams competed in the Formula E Race at Home Challenge. The online sim racing series featured all the Formula E teams, plus some of the fastest professional sim racers in the world, and took place over eight weekends on various digital replicas of iconic Formula E circuits. A late performance surge in this competition saw Nissan take second place in the esports teams championship, and Oliver Rowland third in the drivers championship.

For season seven, the teams will continue to use the Gen2 Formula E cars – the second evolution of the all-electric racers – with the 2020/21 season announced and set to begin in Santiago, Chile on January 16.

“I’m very happy for the team today with second place in the teams championship, this is a great achievement. I was hoping to get to third in the drivers championship, but fourth will have to do. In the race today we changed the car set up slightly and that didn’t quite work out for us. Anyway we worked hard, as we always do, and the results came. Thank you to the team for all their hard work this season, and to the fans for their passionate support.”

“Yesterday was perfect with my first Formula E win on top of P1 in Super Pole and the fastest racing lap. Overall, I am happy with my season, my consistency has improved, and the results and points have followed. Fifth in the drivers championship is ok, but most importantly we are second in the teams championship. I’m really happy for the team. Everyone has worked so hard to produce a fast race car for Seb and myself. I think we have finished the season well here in Berlin, and congratulations to Seb on his podium today.”